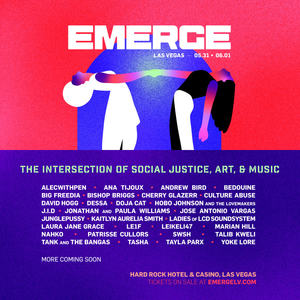 Emerge is a thoughtfully curated annual event for emerging thoughts and voices in music and social impact spaces. It’s a pop-up crucible for the kind of passionate, intense interplay between art and agitation, between beats and movements that pushes culture. It’s a fantasy dinner party discussion between leading figures and thinkers ...

from across time and space, writ large and made wickedly fun.

This year’s festival revolves around four themes--Self, Protest, Fear, Sex--meant to drive conversations and discovery. For two days (May 31-June 1, 2019), festival goers will get a chance to focus on these themes at the Hard Rock Hotel. Though music and ideas form the foundation, Emerge will offer a range of immersive experiences and explorations, from the gritty to the charming. Eschewing scattered, clashing stages or tents, Emerge invites those present to sink deep into the topics one at a time, sometimes for as long four hours--and to find for themselves the new voices making vital connections between grassroots movements, social change, and musical expression.

“We feel a reasonably priced ticket is another way we can fulfill our mission, to explore and encourage the intersection of music and social movements,” says festival founder Rehan Choudhry. “We’re pleased to be able to give potential attendees options to come and explore with us.” This includes a rare solo set by Andrew Bird, a fireside chat with Gerard Way, and a unique Brandon Flowers performance of “Land of the Free” with full choir, as well as performances by Big Freedia, Talib Kweli, Ana Tijoux, Tank and the Bangas, and a diverse range of emerging voices. Speakers include notable activists (Patrisse Cullors of BLM, Emma Gonzalez and David Hogg of March for our Lives).

A limited number of tickets to each main showcase (Protest, Self/Sex, and Brave) are available as of today for $45. Sessions curated by Whitney Bell (Women, Wellness and Reclamation) and by LV’s own Depressed Monsters are $25. Emerge’s cocktails+causes launch party HopeXHuman is $55 a ticket. All are available at emergelv.com/buy-tickets/ .

“Emerge highlights how music and social action inform each other,” says festival founder Rehan Choudhry. “Our artists and speakers all share a passion for social movements and have cultivated a very personal point of view on what’s happening today. Their music and words express this perspective.”

Brandon Flowers, whose set will include a compelling performance of the band’s passionately critical “The Land of the Free,” complete with full choir at the Protest showcase.

Gerard Way, who will explore My Chemical Romance’s seminal albums.

Whitney Bell, a fearless voice from the feminist activist movement who dedicates much of her work to lifting up women’s stories. Bell will act as curator for the Saturday afternoon showcase featuring an all-female speakers and performers.

“We’ve focused on emerging voices and have foregrounded them as we’ve unveiled our programming for the festival. Now we want to give the amazing established artists their due and provide a platform that lets them amplify their message in new, creative ways,” explains Choudhry.

In the history of modern protest movements, the message has been in the music, while the music shapes the message. “Protests and movements are filled with the same intensity and energy that music festivals once had, that power to galvanize people and encourage them to change their lives and communities,” Choudhry notes. “Our speakers and performers share stages, in a deliberate push to give this combined energy room to grow.”

Kicking off the festival, HopeXHuman combines four high-energy performers, a spoken word poet-turned-MC as host, and a bevy of exquisite craft cocktails based on some of the world’s most exciting emerging spirits.